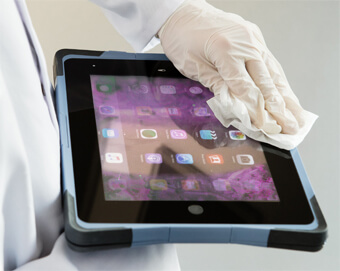 Smart phones, tablets and other mobile devices are everywhere you turn in a modern healthcare facility, and although they can provide great benefits for how staff and patients interact with healthcare information, they can also provide homes for wandering pathogens.

When we consider mobile technology’s widespread use by both patients and healthcare workers, inside and outside of healthcare facilities, and their regular and extensive contact with the hands —and even the ears, mouth, nose and hair for phones— it becomes obvious that they could present a problem for infection control. Nearly all mobile devices will contain detectable levels of microbes unless recently disinfected and a number of studies have demonstrated the presence of pathogens (including multidrug resistant bacteria) on the mobile devices of patients and healthcare workers. For example, a Turkish study from 2011 found that mobile-phone contamination rates were 39.6% and 20.6% for patients and healthcare workers, respectively; and a UK study in the same year found that 12% of patients’ phones harboured pathogens known to cause HAIs. Although less well studied, the situation is similar for tablet devices, which are a recent US study across two hospitals found that around 25% of the tested ‘portable electronic devices’ (mainly tablets) were contaminated with pathogens, and a smaller US hospital study from 2013 found that 3 out of the 20 iPads (15%) they tested were contaminated with MRSA; the latter also found that wiping the iPad with bleach removed all the pathogens under examination, including C. difficile spores.

Despite the potential effectiveness of such disinfection methods, a recent systematic review found that only 8% of healthcare workers regularly cleaned their mobile phones, and a the above study of ‘portable electronic devices’ found that only 35% cleaned their devices at least weekly. The fight against HAIs will need to include a significant cultural shift and much stronger implementation of mobile-device-related protocols. To facilitate these changes, various products have been developed to make mobile devices more compatible with infection-control procedures via the use of antimicrobial materials and watertight, protective casings —see our own FlipPad for example. Further development and adoption of such procedures and technology will be key to maintaining the current downward trend in HAI incidence.